I'm a little surprised at some of the quirks that my blog has been experiencing. Perhaps the formatting I used is creating problems. ... A little later ... It seems to have been a problem with the template I selected. Once again I have been forced to change the look. My apologies to the confused.
Posted by Unknown at 11:46 AM 3 comments:

What a wonder the web is. Today I received a message from a gentleman named Thomas, who writes a blog "Anatomy of Melancholy" from Athens, Greece. He discovered my blog in the course of a search. Google and its ilk have the potential to create the most fascinating virtual neighborhoods based on thought rather than mere geography. It was a delight to find that he tends to ramble, much as I do about the things about him and the hazes of meaning and ambiguity. It was also amusing (but, on reflection, not much of a stretch) to find that we also share an interest in Leonard Cohen, about whom Thomas has an extended ramble which includes the following:
Anatomy of Melancholy
"I think I can say that I'm not a philistine, but I do have a deep-seated distrust of and impatience with what I perceive as extra-literary theory, or even literary theory, when it is prescriptive. I prefer to be descriptive and not to stray from common sense. My distrust of theory probably comes from the observation that rather than help broaden our understanding, in most hands it is used to censure, and even to censor. I heard the words 'offended' and 'offensive' a lot in university. I don't think an open, inquisitive mind should or can be easily offended. Whoever is easily and vociferously offended is trying to cut down the world around them to their own measure, rather trying to understand and to adapt." It makes me think about the famous interchange when Oscar Wilde admitted to James McNeill Whistler, “I wish I’d said that, Jamey,” and Whistler replied, “Don’t worry, Oscar, you will.” I wish I'd said that, Thomas. Wait ... maybe I did ... Wander over there to enjoy some thoughtful and interesting writing. As an aid to navigation, I will just say that Thomas is the one who looks like a moody intellectual ... I, on the other hand, am the burly ruffian.
Posted by Unknown at 11:48 AM 1 comment:

I have started another blog. It is a petty thing. Its reasons for being are to give me a small, self-imposed challenge to create limericks based on the day or week's news and to amuse me. It is called (in my typically pungent manner) LimeRickey or for the paronomastically impaired LimeRickey. (If you do suffer from Ambiguity Deficit Disorder you may want to forgo a visit to the new blog since it will only confuse, sadden and anger you.) These limericks will be written quickly, and thus may not be up to the standards of the Omnificent English Dictionary In Limerick Form (OEDILF). I will have the advantage over Philipp Goedicke of NPR's Wait Wait Don't Tell Me (the strictures under which he composes must have an effect), since I get to choose my own news stories and don't have to worry about Carl Kassel's cold-reading skills.
Posted by Unknown at 9:56 AM No comments:

A brief word about editorial privilege

Because in this blog, I am both mighty and all powerful, it is my privilege to go back and revise from time to time. Since I have just added pictorial capability, I have gone back to give you the joy of looking at some of the photos on the walls of my study. I have also taken the occasion to revise and reformat some earlier pieces.
Posted by Unknown at 2:29 PM No comments: 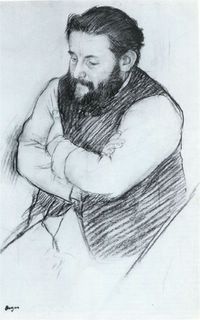 Some people may want to put a face to 'The New Anatomy of Melancholy'. This character study for a portrait of Diego Martelli by Degas suggests that perhaps I am older than you thought.
Posted by Unknown at 11:38 PM 1 comment:

Imagine a shell, egg-shaped & so clear you cannot see it. Be inside it. Be sealed off from all contact. It works so well that it bounces around you like a bubble yet you walk straight & stable. You are so used to it you no longer notice as it pushes people to either side as you pass. You are so used to it you are aware only of its failures. The compression in the subway stops your breath. The wind whips a scarf into your face & you recoil, not hurt but shocked by the touch. You can reach out, but no body reaches in. It has been so long that you do not remember whether you made the shell or others put it around you. It doesn’t seem to matter. No body reaches in ...
Posted by Unknown at 10:16 PM No comments:

Occasionally when I ponder the works of Shakespeare, it seems that he can be a bit verbose. Sonnet #29 for example goes like this:

When, in disgrace with Fortune and men's eyes, I all alone beweep my outcast state, And trouble deaf heaven with my bootless cries, And look upon myself and curse my fate, Wishing me like to one more rich in hope, Featured like him, like him with friends possessed, Desiring this man's art, and that man's scope, With what I most enjoy contented least, Yet in these thoughts myself almost despising, Haply I think on thee, and then my state, Like to the lark at break of day arising From sullen earth, sings hymns at heaven's gate For thy sweet love remembered such wealth brings, That then I scorn to change my state with kings.

Which is all well and good, but it's verbose and in sonnet form. Sonnets are merely limericks that need to go on a diet. Limerick #29

When alone I can get sort of blue, And jealous of those with a clue, I might wish I were smart Or had some kind of art, Then I think that I'm rich to have you.

Remove the silk, the satin and drop them to the floor. I will not enter, nor try to steal a glimpse of your body with the sharp straight lines of elastic cut into your flesh. Stretch your arms above your head and I will imagine you, body free, marks fading, in the sunlight through the dusty window. Put on the faded bluejeans and cotton shirt ... sandals if you want. Here is a washboard and a bar of soap, a galvanized tub with cold water. We’ll carry it out to the back of the house where a pile of clothes waits for your rough justice. Here is a pile of wood and the axe that I will use to split it, dangerously stealing glimpses at you out of the corner of my eye. Scrub the coarse cloth against the washboard. Your breasts move freely within the shirt, straining the buttons, and you start to sweat. Your hands are rough and red in the cold water. I split the logs to kindling, watching you move in your damp soapy clothes, the movements of your body perfect. The axe is silent the wood is done. I lean on the axe, filling my eyes with you and finally you look up, and catch me looking. You smile and take the last of the laundry and twist it over the tub, and toss it into the finished pile, and stand up, and walk to me, and take my work-reddened hand in yours, and lead me to our bed.
Posted by Unknown at 9:46 PM 1 comment: